API 650: The Best Way to Build an Above Ground Storage Tank

API 650: The Best Way to Build an Above Ground Storage Tank

In today’s environment of safety consciousness and environmental concern, it would make sense that above ground storage tank owners would want assurances that their tanks are constructed in such a way that would prevent accidents and leaks. It would also make sense that state and local governments would want the same assurances. So when constructing a field erected tank, how do interested parties know that their above ground storage tank is built with safety in mind? 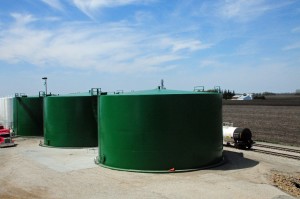 Well, the answer is American Petroleum Institute (API) 650 Standard. Originally published in 1961, the standard establishes a consistent methodology for construction of above ground storage tanks for the oil and gas industry. API 650 was written only for the regulation of above ground storage tanks in the oil and gas industry, but many other industries that store liquids such as fertilizer, chemicals, water, food products, etc., have also adopted the API 650 Standard. For a liquid fertilizer tank, there is no federal requirement to implement API Standard 650. However, many states do require the API 650 standard for liquid fertilizer tank construction.

Regardless of state requirements, it is smart to build your tanks according to API 650 for several reasons. First and foremost, the standard is based on engineering principles to construct a safe tank. Furthermore, API 650 is a standard that has become the international standard for above ground storage tank construction. And finally, API 650 provides certain rights to the customer to ensure the tank is built to the standard.

For businesses that own and operate above ground storage tanks, safety and environmental integrity are critical considerations. By following the API 650 standard, a business is following guidelines developed by the best structural engineers in the world as well as knowledgeable storage tank owners. The standard states that its aim is to produce “tanks of adequate safety and reasonable economy.” Additionally, there are sections of the API 650 standard that prevent structural issues that can result when tanks are subjected to forces such as earthquakes, extreme temperature, and high winds.

API 650 has earned a strong reputation in the American industry and abroad. The API 650 Standard has been adopted internationally for above ground storage tanks storing a variety of liquids. Here in the U.S., states that have regulations for liquid fertilizer tanks have unanimously chosen to require the API 650 Standard. This level of vetting shows the quality of the standard.

But the biggest advantage in using API 650 to construct a storage tank is the rights imparted to the customer. The API 650 Standard states that customers have the right to request all documentation from the builder that demonstrates that the tank complies with the standard. This includes the right to ask the tank builder for the steel mill certifications, radiograph reports for weld integrity, shell calculations, and a letter certifying that the tank is built to the API 650 Standard.

For more information on the API 650 Standard in building above ground storage tanks, please contact us at (303) 773-3230 or click here to request a free consultation.